skip to main | skip to sidebar

As Halloween approaches a monster storytime is always appropriate.  The interesting thing about monsters is the wide range of types of monster books.  Different types include scary monsters, misunderstood monsters (scary looking but nice), sesame monsters (cute cuddley monsters) and of course a mixture of all the above.  For my storytime I did a mix of the above.
One of my most favorite books is No Such Thing by Jackie Frnech Koller.  It's a story about a boy who thinks there is a monster under his bed, and a monster who thinks there is a boy on top of his bed.  Neither child's mother believes him and hilarity ensues.  You can have the kids interact as Monster's Mommy says there's no such thing as boys and Monster says that Boys Eat monsters.  You never know how the kids'll react.
The Story of Growl by Judy Horacek is a cute story about a monster named Growl, who loves to growl.  The neighbors aren't terribly happy about it, so they get growling banned on their street.  This makes Growl very unhappy, until Growl is able to redeem herself with the neighbors and growling may continue.  This story is great because you can get the kids to help you growl.
Next up was Monsters on Machines by Deb Lund.  This is monsters using excavation equipment to build a Custom Prehaunted with thistles for lawn.  The names of the machines are "monsterfied" so the kids got a kick out of it.
The last story I read was I Need My Monster by Amanda Noll.  This was the only story I read that actually might be considered scary.  The illustrations, done by Howard McWilliam, are absolutely awesome.  A young boy can't sleep because his monster was on vacation.  He interviews other monsters looking for long scary claws, creepy ooze, and a spiked tail.  When none of the other monsters come close, he worries that he won't ever get to sleep.  Fortunately his monster returns early from vacation and he is able to shiver himself to sleep.
For a craft we made monster puppets.  I cut out a bunch of multi-colored circles in a variety of sizes on our Ellison die cut, gave them two pipe cleaners for hair/tentacles, a white paper sack, a glue stick and markers.  I really wish I'd had a camera to take pics of the results, but I have a pic of my sample: 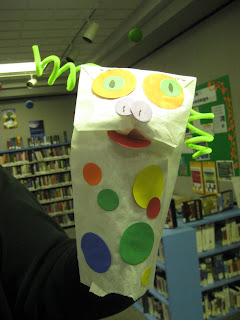 Posted by Rachel at 4:44 PM No comments: